You STINK mister....encounter of a "smelly" kind 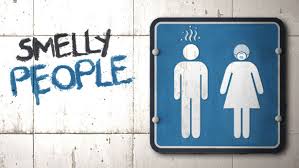 Well, I won't have to scratch my head a lot to arrive upon encounters with people who have been huge turn-offs. In fact all of them could write a detailed version on " How to lose friends and irritate people" and get it copyrighted. It obviously isn't the salubrious intent in the encounters that makes them reminiscent rather it's the polemic nature which never allows them to wither away from my memory.

The other day I meant my man-friday(tongue-in-cheek), Gajodhar*. A ruggedly handsome polished and seemingly educated man. Right out of the Wall St., wearing a beige tuxedo and having a strict look that resembles that of the Nobel jury. Waiting for our flight to Delhi (had gone to Coimbatore for an exam), we both happened to sit on the same bench in the waiting lodge.

Well, he asked me nonchalantly, "Do you know about the literacy rate in Somalia", he asked, pointing to the T.V. set in the lounge where the notorious Somali pirates has hijacked yet another asian cargo loader.

Hmmmm, very low. It's a poor country, I replied.
"The world knows it's a poor country man. That's the problem with the youth. The paucity of knowledge bewilders me", he retorted. You know how many Indian navy personnel are deployed to provide immunity against this gangs...more than 20,000.

"What do you feel son, would you call yourself a responsible Indian citizen", he asked another rhetorical question. Suddenly piracy seemed to be a bigger evil than hunger and poverty. The problem was not that I was being put to a shit test rather it was being bombed by questions from a certified nincompoop who had nothing better to chat about or shut his mouth in a pubic place. I can't deny that my ego was bruised but then I sympathized with the weirdo. Perhaps, a bad day at work or pathetic sex life.

I said nothing. But, unfortunately my silence didn't enervate Mr. Gajodhar. "He vocal cords vibrated again,

Smartphones, I tell you. Cost you a fortune, not worth a dime." Who the hell was he talking to. I got irritated by his monologues but obviously they were directed to me. Sanity struck me as I got up from my chair and decided to sit at another, more congenial place, free from such chronic species.

"Hey, can I use your phone for a sec. Mine just got hanged", he said, twisting his blackberry between his thumb and index finger. The angelic part of me complied as I gave him him my phone. "Here you go", I handed him. "Apple", he exclaimed. "Paucity of general awareness doesn't lead to technical orthodoxy after all:, he continued. My eyes almost popped out astonishment to see someone stooping so low or thinking himself to be too superior. "Everyone cannot afford one", I made a dig at Mr. Pretentious.


Luckily, the announcer made the announcement for the departures. I got up hastily and asked for my phone and left the spot as quickly as I could ending my ordeal.

They came, they saw, they read!